See all this Month's Articles

The efficient utilization of resources depends upon effective prioritization of patients’ needs. The use of the Columbia-Suicide Severity Rating Scale (C-SSRS, a questionnaire used for suicide screening and assessment) at the time of admission helps in the assessment processes to identify potential suicidal patients thereby informing the clinical judgment of professionals to implement right interventions. The provision of appropriate interventions to deserving patients has been observed to increase patient satisfaction that can ultimately reduce length of stay in acute settings. The screener version of Columbia-Suicide Severity Rating Scale allows staff to appropriately measure suicidal risks that ranged from low, medium to high. The medium and high-risk levels require 1:1 observations to ensure safety. C-SSRS supports suicide risk assessment through a series of simple, plain-language questions that anyone trained in its administration can ask. Those answers help users identify whether someone is at suicidal risk to further assess the severity and imminence of that risk, then gauge the level of support individuals need.

Research has proved that the C-SSRS can help identify people who are most at risk for dying by suicide and direct them to the help they need. Its effectiveness and ease of use make the scale a vital tool for suicide prevention. John George Psychiatric Hospital (JGPH) adopted this evidence-based tool to increase provision of quality of care and prevent self-harm.

The prevalence of suicidal attempts among vulnerable populations suffering mental illnesses such as depression and bi-polar disorders has been well documented in many studies. Timely interventions from professionals cannot be overemphasized in rendering appropriate assistance and support to the individuals. Clinicians should be aware of the heightened risk of suicide and suicidal behavior within the first 3 months after initial diagnosis (Randall, Walld, Finlayson, Sareen, Martens, Bolton et al. (2014). A particular study indicated that 10,000 cases of people who had died by suicide had contact with mental health services within the 12 months before death, 16% of them psychiatric inpatients at the time, and 21% of these under special observation (Sakinofsky, 2014). The findings from another study showed that family history of suicide, mental disorder, hopelessness and social support emerged as significant predictors of multiple suicide attempts (Liu, Zhang, and Sun (2017). Psychiatric disorders – particularly depression and anxiety disorders – are among the strongest, most consistently reported risk factors for suicidal behaviors (Subica, Allen, Frueh., Elhai, & Fowler. (2016).

The theoretical framework of the study was based on the C-SSRS (Columbia-Suicide Severity Rating Scale), a Lighthouse project formed under the auspices of Columbia University. The C-SSRS has been projected as a key to ending suicide — a devastating, but preventable, worldwide public health crisis. The internal consistency of C-SSRS was high with Cronbach’s alpha of 0.937 and 0.946 (Posner, Brown, Stanley et.al. (2011).

(1) Use of C-SSRS (Columbia-Suicide Severity Rating Scale) increases detection of suicide. (2) Use of C-SSRS tool reduces putting patients on one to one observation.

Significance of the study

The study has significant impact on the use of C-SSRS (Columbia-Suicide Severity Rating Scale) as a universal screening tool in John George Psychiatric Hospital. Screening of all patients seeking services improves standardized workflow for consistent assessment to provide quality care. One of the ways to ensure quality involves timely provision of care to meet the needs of patients. The sensitivity to C-SSRS allows professionals to determine the appropriate allocation of scare clinical and supportive resources to those in need thereby increasing efficiency and effectiveness of interventions. In the past, one-to-one observations were assigned to those suspected of having suicidal ideation without plans, but did not rely upon clinical determinations made through an evidence based model of screening or assessment. This standardized approach both provided increased internal validity amongst providers and care team members, but also allowed for more prudent use of human resources in the support of patient care.

This was a quantitative retrospective study. A total of 2,116 medical records of inpatient admissions from October 2017 through June 2018 were reviewed. Approval was obtained from the Alameda Health System Institutional Review Board and the study was initiated once this process was completed.

A simple randomized selection of 2,116 medical records of patients admitted from October 2017 through June 2018 was done to obtain a significant sample size (n). Random sampling guaranteed that each member of a population had an equal chance of being included in the sample. This type of sampling is ideal for more controlled studies where human bias in the selection of the sample is intolerable. Selecting every 20th from the 2,116 yielded 106 participants from which six were excluded due to missed C-SSRS screening.

The medical records of eligible 100 patients were reviewed for suicidal risk levels (Low, medium, and high). The numbers of 1:1 due to suicide prevention based upon risk levels, age, gender, and ethnicity were itemized for descriptions and frequencies (Table 1). All variables were entered into SPSS (Statistical Package for Social Sciences) Version 24.0 to determine significance of suicide detection on the use of C-SSRS (Columbia-Suicide Severity Rating Scale) tool. The 1:1 observations indicated that 5 out of the 100 were placed on 1:1 due to high risk to suicide while the remaining 95 were not placed on 1:1 due to low risk for suicide (Table 2). All data kept confidential and encrypted to prevent access by any authorized person. 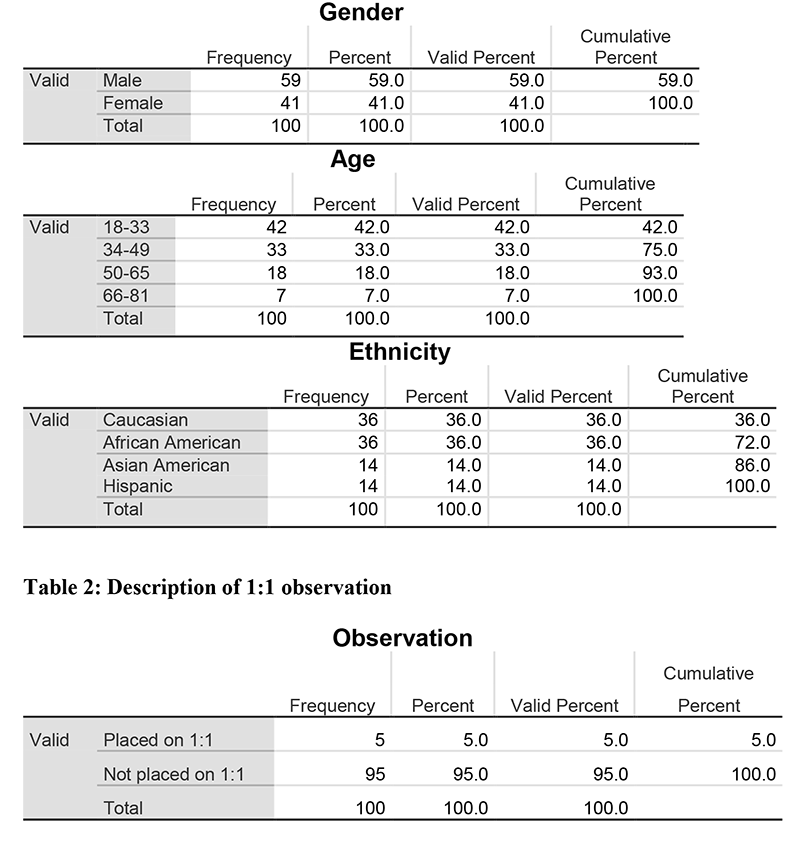 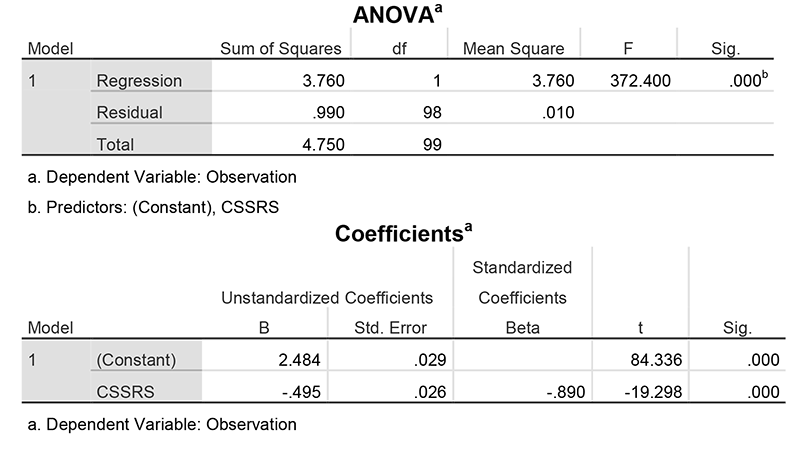 The use of the screener version of C-SSRS facilitated quick identification of patients with potential suicidal risk. Suicidal attempts can be perceived by professionals as cry for help. Therefore, C-SSRS results yielding a score of medium or high illustrates the need for specific interventions that can prevent cataclysmic consequences. A structured assessment of suicidal ideation and behavior significantly improves identification of high risk patients (Posner, Brown, Stanley, Brent, Yershova, Oquendo....Mann (2011). This process brings consistency that allows judicious use of personnel for precise quality interventions such as one to one observations, therapeutic interviews, participation in occupational therapy activities, and timely administration of medications.

In the healthcare environment, self-harm thrives when needs cannot be met on time. The use of C-SSRS screener version facilitates meeting patients’ needs beyond expectation to preserve human life as professionals differentiate suicidal behavior and non-suicidal self-injurious behavior. These factors have a positive impact on quality of care, length of stay, and recidivism. C-SSRS was implemented to ensure the adoption of an evidenced based tool was used for suicide risk identification. All JGPH clinical staff members were trained in the screening process as well as documentation. The knowledge and proficiency of staff increased phenomenally over several months of practice.

The C-SSRS an evidenced based screening and assessment tool was used to provide preventative support, thereby served as risk identifying method for patients presenting to JGPH and across Alameda Health System (AHS). Specifically, at JGPH the usage has contributed to increased patient satisfaction and reduction in 30-day readmission rates. This study focused on inpatient admission but the use of the screening tool actually originated from Triage. At the inception of the project, many of the patients particularly those on Psychiatric Emergency Service (PES) and Crisis Stabilization Units (CSU), with low risk scores were placed on 1:1 observations due to ligature risks identified by a well-known hospital regulatory body.

In October of 2017, the Joint Commission (JC) conducted a site visit and noted a number of potential ligature risks to patients. Since that time many departments, including but not limited to, JGPH Administration, AHS Engineering, Environmental Services, Risk and Quality, Nurse Education, and Clinical & Professional Staff have engaged a number of activities designed to modify the environment and mitigate those risks. The significant changes included replacement of building hardware, furniture, fixture and other items as well as increasing the number of patients on a 1:1 (and arms-length) observation at any given time. The increased numbers of one to one observations were predominantly in the PES/CSU due to identified ligature points even with low high risk score on the C-SSRS tool (Table 4). 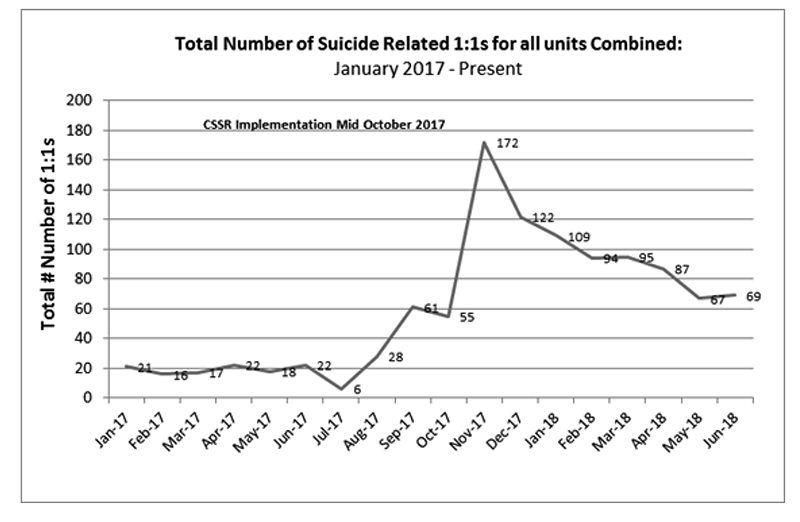 Excluding the environmental modifications already rectified to date, it became clear that continuous usage of C-SSRS will continue to refine the screening and assessment process and assist in a clinically appropriate reduction of patients placed on one to one observations due to suicide or self-harm. Research suggested that suicide screening tools to support assessment are important tools for clinicians and researchers when working in the intervention and prevention of suicide (Jakobsen, Larsen and Horwood, 2017).

Further research is recommended to determine the impact of the C-SSRS tool on both Inpatient and PES units.

The study was a retrospective review of medical records of inpatient admissions from October 2017 through June 2018 screened through the implementation of the C-SSRS. Therefore, patients included the study were limited to those screened through the tools. There was no control group in the study, and the study was limited to only one hospital within the Alameda Health System. The ligature risks identified in other areas of the hospital also affected the reliability of the study as that fact made it difficult to generalize the findings to PES and the Crisis Stabilization Units.

The purpose of study was to determine detection of suicide using C-SSRS (Columbia-Suicide Severity Rating Scale) tool in John George Psychiatric Hospital inpatient population. Data analysis excluded patients not screened through C-SSRS tool and those discharged from Triage, Psychiatric Emergency Service (PES), and Crisis Stabilization Unit (CSU). Findings indicated that the C-SSRS tool predicted one to one observations based on high risk. On the PES, Triage, and CSU patients with low and medium risks levels on the tool were placed on one to one observations consequential to ligature points identified by regulatory agencies. A few of those patients were placed on 1:1 observations due to the ligature risks identified on the units before mitigations were completed. Overall, the quality of services to consumers witnessed significant improvement in the areas of deploying the right personnel to those truly in need to safe life and prevent self-harm.