See all this Month's Articles

There are numerous new laboratory referral arrangements that involve billing which may implicate several laws at both the Federal and State level. Due to reduced reimbursements and narrower payor networks, these arrangements on the surface may seem advantageous and attractive as a means to increase revenues and align new clients. However, the health insurers as payors of pass-through laboratory claims are now recognizing and making attempts to stop the flow of these potentially fraudulent and lucrative schemes through lawsuits and tougher contracting.

1. What is Hospital Pass-Through Billing?

Pass-through billing arrangements are commonly identified basically where laboratory testing claims are billed by an entity different than the one that performed the service. Pass-through billing, sometimes known as account billing or client billing, is a billing model that has been around for years. The arrangement is essentially a purchased service agreement pursuant to which a provider contracts for the provision of laboratory services. The provider typically purchases laboratory services at a discount, marks up the price, and rebills the purchased services to patients and payors. In some instances, this is permissible as a reference laboratory arrangement, but in others, payor policies or federal or state laws may prohibit the practice depending on the type of provider.

In recent years, a new form of pass-through billing has emerged termed by management companies as hospital laboratories. These arrangements often appear to target small, rural hospitals or hospitals which may be in need of capital, and typically only apply to services reimbursable by commercial payors. In a typical hospital pass-through billing arrangement, management companies affiliated with independent reference laboratories, or a laboratory itself will enter into an agreement with a hospital pursuant to which their associated client base is permitted to refer outreach testing to the hospital outreach laboratory. The hospital then bills non-governmental payors as an in-network provider. See Diagram 1 below. The independent reference laboratories in question may be out-of-network, which is more typical, but may be in-network as well. Regardless of their status, their claims have less favorable reimbursement than a hospital payor contract. The purpose of the arrangement with a hospital, is to take advantage of the hospital’s payor agreements, which yield a higher reimbursement, and the hospital benefits from the opportunity to increase their laboratory revenue and client market share. While this sounds advantageous to both parties involved, a problem arises when the laboratory testing is never performed by the hospital laboratory and is instead solely performed by the management company’s related independent reference laboratory. 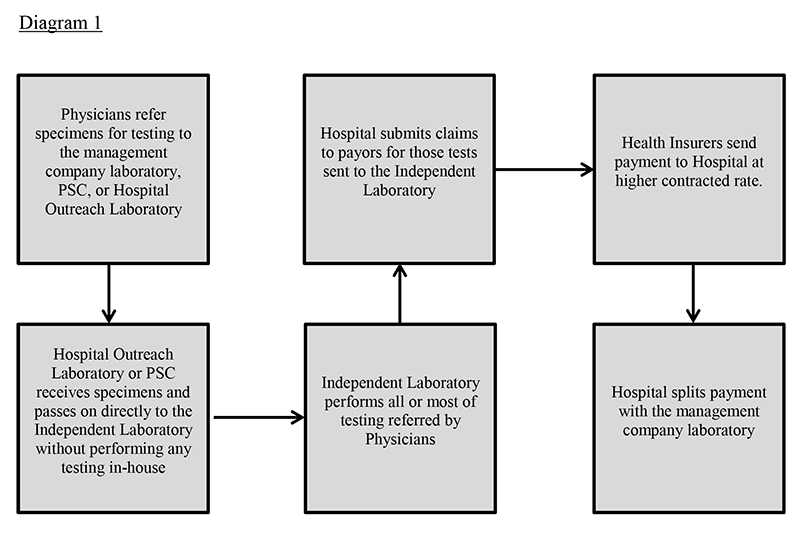 *Note: The arrangement may be set up with the specimens going directly to the reference laboratory and only reports are sent to the hospital from which claims are submitted. There are multiple permutations of the hospital model, each with different compliance considerations.

At face value, this may appear to be an acceptable reference laboratory arrangement because a hospital is permitted to use reference laboratories for patient services and bill for the services under certain circumstances. However, in this case, payors take issue with paying a hospital for a test they did not perform at a higher contracted rate than the payor would have paid for the same test had the performing independent laboratory billed for the test themselves directly to the payor. This scheme may also increase the patient’s responsibility as well due to the more inflated pricing, which is solely for the financial gain of the management companies. Additionally, a larger, nationwide network of referring physicians to provide testing specimens is seen as desirable to fully utilize the capacity of laboratories and further increase testing volumes and laboratory revenues. However, a problem occurs when the physicians are submitting specimens in exchange for a portion of the reimbursement. This can lead to overutilization and ordering of medically unnecessary laboratory tests, and can constitute an illegal kickback or violation of the physician self-referral law, more commonly known as the Stark Law. Furthermore, the requests for laboratory testing services are often unlawful inducements that prey upon financially strained rural hospitals. These hospital laboratories are actually used as fronts to conceal the identity of the management company laboratories that actually perform the testing, especially if the CLIA number of the performing laboratory is not accurately depicted on the claim. Another strategy is for the management companies to actually help set-up the laboratory outreach programs in mostly rural hospitals for the sole purpose of the pass-through billing arrangement to take place. Finally, in some variations of these problematic arrangements, the hospital laboratory only accessions the specimens and then refers the specimen to the laboratory for testing. In this variation, the billing is not the only issue that is questionable. Arrangements where the management company helps the hospital set up a laboratory for the purpose of receiving and processing the specimens and the hospital submits the claim to the payor for reimbursement are seriously flawed. These arrangements are sometimes seen in toxicology, pain management, molecular diagnostic, and genetic testing. Once the hospital receives payment from the insurer, the hospital then splits the revenue according to an agreement with the management company/laboratory, which is also fraudulent.

The pass-through arrangement is often confusing for many hospitals and for that reason, they may not even realize they are being deceived. Hospitals are used to such arrangements with the national reference laboratories, but there are significant differences in these purchased service agreements that are fraudulent. The large national reference laboratories often have patient service centers (PSCs) in locations convenient to their physician clients and near hospitals. The payors actually often prefer a large number of PSCs to be considered in-network or exclusive. These large reference laboratories may even contract with the hospitals to do their STAT testing locally onsite at the hospital laboratory location with the understanding that other more esoteric testing be sent on to their reference laboratory. There are several differences in this type of scenario versus the hospital pass-through arrangements in question:

There are many compliance concerns associated with hospital pass-through billing arrangements, including federal, state, and payor contract concerns. In addition to the various legal issues, these arrangements are clearly starting to attract the attention of state and federal regulators and private and commercial payors. This is largely due to the fact that under these arrangements, small, rural hospitals suddenly receive samples from patients all over the country with no nexus to the hospital, and the hospital’s overall revenues increase dramatically. Whenever there is such a drastic change, the arrangement will likely be scrutinized.

The billing hospital will be directly liable for any recoupment claim successfully brought by a payor related to the billed tests in question since it is the hospital that billed the services and has a contract with the payor. This means that the hospital, and not the management company/laboratory, will be the subject of any recoupment action based upon theories such as lack of medical necessity – an increasingly common basis for recoupment actions

Though there are many regulatory issues to consider when structuring a hospital outreach laboratory, it is certainly possible to establish a legitimate outreach program that generates revenue for a hospital. First and foremost, the hospital must actually perform 70% of the testing that it is billing for. If this factor is not satisfied, it is critical that the hospital comply with all applicable Medicare reference laboratory exception and any other applicable state or commercial payor requirements for non-Medicare work. This distinguishes the arrangement from the hospital pass-through billing arrangements discussed above. Next, any remuneration exchanged among the hospital, the performing laboratory, the management company (if applicable), and the referring provider must be structured in a manner that satisfies applicable Stark Law exceptions (again, this only applies if doctor is receiving remuneration) and AKS safe harbors, as well as any state law equivalent. Also, applicable state law must be consulted to determine whether the hospital is even permitted to bill and markup the cost of services for services it does not personally perform. Finally, the terms of the hospital’s payor agreements must be carefully analyzed to determine whether such an arrangement is even permitted under the contract.

In order to compliantly bill for hospital outreach laboratory services and optimize the revenue management, laboratory specific consultants are recommended. This will help to ensure that claims are accurately submitted and AR oversight is maximized while monitoring that as the outreach program is operating at a high quality to include proper reporting. The arrangement should also be reviewed by an attorney well-versed in healthcare regulatory issues to verify that the arrangement complies with applicable federal and state laws and regulations, as well as with the terms of the hospital’s payor agreements.